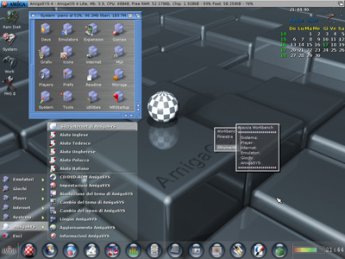 Dear friends of Retrocommodore, in this article we will talk about the emulation of Amiga.

With the unstoppable technological advances in the personal computers and game consoles sector, which are increasingly performing, many programmers have dedicated themselves to the emulation, on these modern machines, of the oldest platforms.

With a deep knowledge of the hardware to be replicated via software, and with an unquestionable love for retrocomputers and backseaters, emulators have been created for almost all current operating systems.

In this specific case, the one related to the glorious Amiga, the first example of an emulator was UAE in 1996 by Berndt Schmidt. The name originally meant Unix Amiga Emulator, but later became Universal Amiga Emulator.

The UAE has been classified as a freeware under the GNU General Public License since its first debut. It was the first brick towards the modern Amiga emulation.

In fact, the UAE carried out porting for the most disparate operating systems such as Linux, Mac OS, FreeBSD, FreeBSD, Dos, Windows, Risc OS, BeOS, Palm OS, Android, AmigaOS 4, Morphos, AROS, Xbox, Playstation Portable and Nintendo WII.
To date, the most advanced and frequently updated porting is WinUAE for Windows and P-UAE for Linux, Mac OS, Amiga PPC and Android. The developers behind these two emulators, now in release 2.3.3.3, are Toni Wilen and Mustafa Tufan.

I will take as an example WinUAE, in my opinion between these two porting the most complete of functions and able to faithfully reproduce the whole range of the Amiga platform, to go on to see in detail the main characteristics of a UAE emulator.

WinUAE avails itself of the collaboration of companies such as Cloanto and Amiga Inc. as well as groups of developers worldwide that contribute to integrate the emulator with products capable of pushing the AmigaOS 3.1/3.9 to the maximum of its graphic and technical capabilities, such as Amikit 1.5 and AmigaSYS 4 r1.3. These two compilations, which can be downloaded free of charge from the respective sites, boast more than 300 Amiga Classics programs and more than 30,000 expansion files and add-ons!

Once executed, the emulator first requires you to locate a valid kickstart rom. The essential rom are the 1.3 for Amiga OCS/ECS, and the 3.1 for Amiga AGA. The rom are contained in the CD of the Cloanto "Amiga Forever", which owns the rights, which can be purchased directly from their website. Once the position of the rom has been indicated, we can decide which Amiga to emulate. To make it easy for the less practical, you can choose preset configurations based on the model to emulate, choose the Workbench disk image (1.3 to 3.1 or the AmigaOS 3.5/3.9 CDs) or a game image, and then launch the actual emulation.

The entire range of RTG graphics cards up to 1 GB in 8/16/24/32 Bit versions is available.
The floppy section includes all the existing options: 3.5 "DD, HD and Escom and 5.25" SD in ADF format. The Hard Drives section includes the possibility to use a dynamic disk image in HDF format 32 sectors/512 blocks, use a directory of your PC or connect a real Amiga disk. The physical PC CD/DVD player is just enabled and will be available directly in the Workbench. Alternatively, you can upload an ISO image. In this way you can also install AmigaOS 3.5/3.9 on version 3.1.

As you could see, with the right configuration, it is possible to recreate without compromise the magic of any Amiga model with the practicality of having them all at hand to perform tests, dust old programs and games or simply spend time enjoying our passion.
Leave comments in the forum as well as any questions or insights about this article.