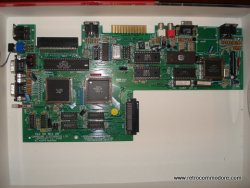 Commodore 65: Let's do it work with incompatible chipset

This article written by Giorgio Guagnini, that many thanks publicly to the technical ability and the undoubted tenacity in getting results at first sight impossible, tells the story of a veritable resurrection of a Commodore 65 motherboard, processor and video chipsets in the correct versions. An impossible task that only the ability of Giorgio was able to bring to fruition. The issue hoping it will be useful to those (I think very few in the world) are attempting the same feat.

The starting point were the results of tests made by Riccardo Rubini (a big embrace and thank you for the tests). This result is also your and thanks to you. Two links relating to the work of Riccardo.

The cpu and the video chip 4510r5 4567p don't work, in whole or in part on a tab ver 2 (a or b) it is logical the inverse; a cpu or 4510 4510 r 3 and 4 cannot operate on a card rev 5. My luck is the autonomous capacity to accomplish what I have in mind. Use an external structure to materialize the ideas most fools would cost so much that dreams remain such. We had a commodore 65 rev 2b, all standard components but a cpu 4510r5 and a 4567p video chip. So I researched and designed a cpu 4510r5 adapter (see picture below).

And after unnerving and rebutting evidence controls the socket adapter is inserted.

The whole thing has turned working apart from timing and signal problems related to incompatibilities that blocked the operation of the machine. Then I also stabilized those cpu and everything worked. The photo shows the c65 running and 4567p video chip problem reported by Riccardo Rubini.

Problem solved. The more mischievous to forewarn you that the difference between the versions of the two Roma photos should not suggest a typical fake.

We have programmed n. ROMs for the tests. The previous picture is for the first time and that was the version of the boot on the photo below shows a version that best suits your board stability as saying: to prevent suspected fake, must i die for ad hoc programming a rom that is then? Telenovelas are things from TV. :-)

Latest problem: we didn't have a floppy drive for the commodore 65. The only way out was to try to make compatible the floppy interface c65 with a standard floppy drive. The third revision of a interface between the two sides solved the problem.

Remain a few details to fix but details. The more it is done

Hi all and not give up ever!. Someone said before me

“Everyone knows that a thing is impossible to realize until someone inexperienced comes and invents it.”
(Albert Einstein)