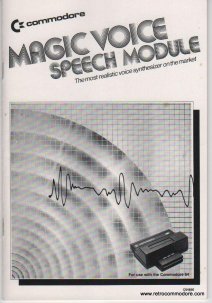 
…..I don't know the status of what hard tech information is out there but I can relate the story of Magic Voice and how it came to be in the TED/364:

Dr Richard Wiggens and Tom Brightman were lured away from TI after doing the Speak and Spell, back then that was a monumental new thing that technology could do. I gathered that the background work that we didn't see at CBM was the gathering of the phoneme vocabulary which sounded like they got an audio room and created the library themselves.

They then came to West Chester to start the process of emulating the jungle logic into a gate array.  I forget the young man's name that came from Texas and stayed for a few weeks but I remembered that he worked with Eric Yang, one of the IC engineers on the TED chip.  Eric (real name Chow Yan) showed him things like there was no such thing as a minimum delay through a gate when on a piece of silicon (race condition between clocking and clear flip flops).  There was one thing that stood out that we would later adopt as part of the vernacular; there was a register that you wrote to to request something, and if you wanted it to do it quickly you wrote the same value again to the same register again.  Terry Ryan asked "so you mean do it, do it now?"  "Yes" the young man beamed.    We called it the Texan Register.

MY understanding of the gate array was that was the real joojoo of Wiggens and Brightman and it was responsible for some of the command structure of how the phonemes where called and when. I learned my fricatives from my guttural stops around this time.

So when all was said and done they went to gate array with the 8706 which was pretty much a first time we had bypassed the custom silicon of MOS. For all of the complaining we did in jest, we only ever found one thing mispronounced which was "gurple" instead of purple.  As one thing lead to another it was only natural that we would take a few spare minutes and set up over a dozen 364's all saying "gurble" in tight loops which made a cacophony when walking by.  We never got tired of that for some reason, must have been the stress.

I caught up with Dr. Wiggens at the next CES show, (it's a fair bet that I was the only one calling him Richie around MOS)and had an amazing afternoon as he went to the different speech driven booths and tried level 2 and 3 type rules and analyzed the methodologies: I remember the word "hobo" being one of the test words he would use.

Last I knew Tom Brightman ended up at Atari, never found out what happened to him or Richard after that.  I will probably dig into some of the social networks tonight now that it's on my mind.....